Meatless Monday on the fly

A friend on Twitter has been championing the protein rich savoury breakfast lately. Hers usually consist of daal, kale, avocados, poached eggs and recently chapattis too. What can I say, her photos have been building a craving in my soul, and today I tried to do something about it.
(If you want to see what inspired me, have a look on Twitter & Flickr at Monica Shaw's tweets & pics.)
I planned a daal and rice, I wanted to practice my chapatti making and thanks to Monica, I wanted some veg curried in some way too.  I looked in the fridge and saw the pack of baby courgette I had bought for dips and baby led weaning food, and decided to try something with that, thinking if I can't get my family to eat courgette curried in some way, then I'm giving up trying to get them to eat it again!
I sliced a couple of garlic cloves and fried them in a couple of teaspoons of ghee and then added a teaspoon of cumin seeds. I then added the sliced up courgettes and fried for about 5 mins til the slices were softened and starting to crisp at the edges.
I had used half a can of chopped tomatoes in the daal, and reserved the other half for dinner tomorrow, but I poured about an inch of water into the tomatoey tin and swished all the juice out into the pan. Waste not want not. I then halved a handful of organic cherry tomatoes (cos that's what I had, otherwise I would have used some of the tinned actual tomato or chopped up a couple of normal tomatoes.)
Then I sprinkled on half a teaspoon of salt and a teaspoon of my garam masala. I left this to cook on a fairly high heat, to smush the tomatoes down, and then just before serving I stirred in a dollop of natural yoghurt.
I have to say, I did myself proud, the flavour was exactly what I'd been going for, and it perfectly complemented the creamy smooth masoor daal. Littl'Un had 4 helpings, including the last 2 slices from Papa's plate. Papa had 3 helpings. Yes, Papa who won't eat courgette!
I have to add a note that I also served a really yummy salad of sprouted beans and lentils with half a mixed leaf bag, dressed with olive oil and blackcurrant & rosemary vinegar by Womersley Foods. The sweetness was the perfect dimension needed to complete the experience for this meal. 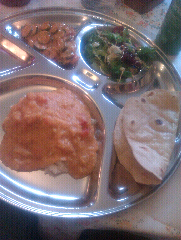 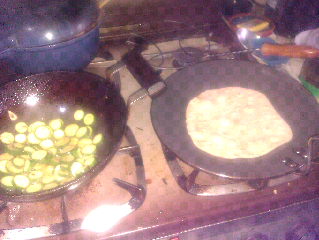 Posted by sweet without sugar at 20:29