I got some very nice stewing lamb from the butcher in Waitrose, and so I decided I'd quite like to do something comforting and curryish with it, but rich and tempting after the few days of illness and misery.
I marinated it in yoghurt, ground cumin, ground cinnamon, black pepper & salt, for a few hours.
When the marinating time was up, I finely chopped a large onion, and sliced a coupla cloves of garlic, and shredded up a thumb-tip sized bit of ginger. This usual triumverate of curry base was fried in ghee, in a heavy casserole dish. When they were soft and slightly golden, I added the meat pieces without the marinade, browning it on all sides. Then I did scrape the marinade in also and added a little more salt and cumin and pepper, coarser ground.
Once the meat was nicely browned, I sloshed in a little water, put the lid on and let it simmer on a very low flame. I managed this for an hour, but longer would have been nice, but the meat was tender enough as I'd cut the pieces small. Oh, it's important that there be some bones in the meat or the flavour is not rich enough.
About twenty minutes before we wanted to eat, I added my basmati rice. Then I added a teaspoon of marigold low salt bouillion powder and enough water for it to come to the first joint on my finger when the finger is placed in the pan to gently touch the top of the rice. This is usually just a little more in volume than the rice volume. In this instance I measured 3 measures of rice and 3 and a third measures of water.
This method using the finger joint is foolproof, was taught to me by a half-Sri Lankan friend who was addicted to rice. It is also WAY more comfortable to try if using cold water rather than water straight from the QuickCup or a kettle!
I then brought this to the boil, clamped on the lid, turned it right down, and left it to simmer for 12 or 13 mins. When that timer goes off, I switch off the heat and set the timer for another 5 mins. Only after that second timer do I lift the lid. I gently stir the food, season to taste and serve.
I served this with green beens fried in a karahi with mustard seeds & garlic and a sprinkle of home-made garam masala; and a yoghurt dressing made by dolloping more natural yoghurt into a bowl and stirring in cumin powder and salt and a pinch of sugar (or agave nectar)
Littl'Un loved the rice and yog, and crunched a few beans too.
The whole meal was tempting and fragrant and sour and rich and just what I'd hankered after. 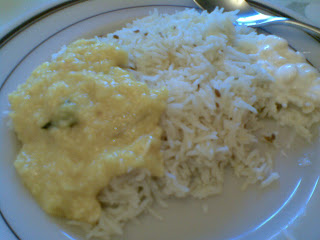 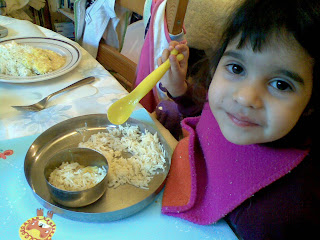 When I picked up Littl'Un from nursery yesterday she wanted to know where we were going for lunch or dinner. She then asked *really* nicely if we could please go to that restaurant with the yellow chicken in sauce and rice and yoghurt, and puppets on the ceiling, but sadly, it's rather a long way to go to Covent Garden for lunch and be back in time to collect Big'Un!
Well, then I remembered I had a box of leftover roast chicken from Sunday, ready for making chicken and bacon pasta (more on that later) and I can surely spare a little, so I suggested I could try and make her yellow chicken, rice and yoghurt at home? Well, this delighted her, and she was very very keen to get home and see what I could do!

So, I adapted the recipe I use for Gujarati Kadhi: (this will make a small portion)

Add and mix in
6-8 tbs water.
Boil slowly until taste of flour is not "raw", and there's a "soft" texture (you'll know when you see it.)

Now melt some ghee or heat some plain oil and fry:
1 sliced garlic clove
3 or 4 curry leaves
half a tsp mustard seeds if liked
a finely sliced green chilli if liked

When yog mix is cooked enough, add tempered flavourings to it and mix. Add salt to taste.

While this was boiling I made buttery cumin flecked rice, and boondi raita.

She was happy, tho she actually preferred the yoghurt and rice which is a classic meal for kids all across India and Indian descended kids across the world! (I always forget about it as I can't digest yoghurt!)
I served it on a metal thali with a little metal "bati" or bowl too.


Posted by KitchenMama at 13:11 No comments: