rofl looks like some of the cakes vommed themselves out! 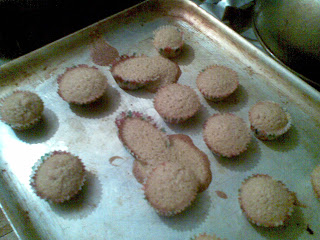 I have in the past, been seduced by the various war on waste, using up leftovers books and articles around recently. But as I discussed with my wonderful Godmama, we never seem to have the 'right' kind of overlefts. I prefer to cook one pot type dishes, and they are already a meal, so the only thing to do usually is put them in a microwave-safe 'dubba' and reheat.
Well, finally yesterday I had too much mash! The plan had been to make my lamb mince comfort pulao, but I decided instead to use the mash (and 'healthy' mash it was too, with skins left on, we call it dirty mash) so I fried up the frozen lamb mince (I have a free flow bag in there at all times) with some frozen chopped onions, a teaspoon of garam masala and a teaspoon of cinnamon and half a teaspoon of salt. A cupful of frozen peas added some emerald veggie colour. Once that was cooked fully, I tipped it into a bowl with the mash, and mixed it all thoroughly. I then made patties by hand and fried them in the flat bottomed non-stick wok I just cooked the meat in, flipping once, and served them golden, crisp and lusciously savoury. Littl'Un liked a splodge of rich organic ketchup, Big loved them as is, I enjoyed a mouth-tingling garlic Tabasco puddle to dab at.
I couldn't find the recipe I used last time I made kheer, so I improvised a rice pudding with some indian flavours - pinch of saffron, ground cardomom seeds, ground almonds, and an hour later had a rich, creamy, deceptively light-tasting rice pudding. Big'Un loved this, Littl'Un did her shoulder-collapse and announced her hate of such things. Ah well, you can't win them all!

Posted by Kitchen Mama at 12:23 No comments:

I'm feeling quite pleased with myself, last week, I managed to pick up a basket of shopping, in Waitrose, in 10 minutes, for under £15, and that was all I needed for this week's food!
Admittedly, it was helped by the fact we'd not eaten much during half term in the end, partly from being too full from planned meals out, partly because some of us were coldy and not eating as much, and also partly because we were away for a coupla days. But there was no top up shopping, so it's a good week!
I'm still working on using the bits in the cupboards, and thanks to an idea from one of you lovelies, I've switched my Abel & Cole box, so I'll get veg one week and fruit the next, and then alternate. This could be fun. And will mean more crumbles. Can only be a good thing!

SeniorGodPapa rustled up a lovely salami pasta for when we got back from our Hally Happowe'en weekend, which we matched with a luscious celeriac remoulade.
Meatless Monday we had a quick and easy bean chilli with wholegrain rice and a lil soured cream.
Tuesday we had sausages and veg planned for the kids and a wan chai ferry kit for us, which was delicious, and used up the chicken I'd bought on offer and stashed in the freezer. There were enough leftovers for Littl'Un to get a lunch and Papa to take some packed-dinner - which is only fair as he cooked it - yay!

On Wednesday I took my time throughout the afternoon and slowly put together a cottage pie with tons of hidden veg, including the rest of the celeriac in the mash. Plenty of gravy for Papa to smother it in, and an apple and pear crumble for pudding. Littl'Un surprisingly loved the crumble and asked for more after lunch today.

Today (Thursday) with just me and the girls, I made quesedillas (apologies to those of you who saw my Facebook status to that effect.)
Tomorrow is Diwali, and we will be having pumpkin curry with either tilapia or chickpeas.

Let's see how low I can keep that bill...

Posted by KitchenMama at 22:26 No comments: