So after a meeting in school yesterday, I stopped at the chippy on the corner and on Godpapa's (hungry) advice, bought 2 portions of chips to go along with the fried eggs and gammon slices (sliced off a slow cooked half price gammon joint from earlier in the week) and peas I had planned as a quick and easy meal. 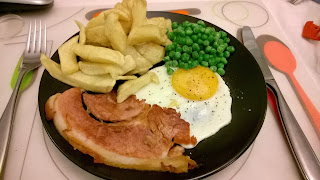 Of course Godpapa wasn't staying for dinner and we didn't actually even open the second portion of chips.  Big'Un has been unwell all week, (and is finally on her first ever course of antibiotics) and Littl'Un never really eats much anyway, and Tiny hasn't been his usual happy-munching self for a couple of days either.  I blame the weather.

So I found myself with a full large portion of chips today and decided that instead of refrying them or binning them, (or stealthily eating them straight from the fridge) perhaps I would use them to switch up today's intended meal and take it from the standard nursery fare, right from out of left field to a proper Credit Crunch frugal "use up leftovers" meal.

The menu plan was macaroni cheese, and I had intended to fry up some leeks with a portion of sweetcorn in butter as a side dish. I hadn't decided whether to add some little bits of the gammon, but I did get in a larger than usual milk for playgroup to allow for making the cheese sauce.  As my longtime or regular readers might recall, one weird foible I have is a dislike of making pasta.  Yes, I know it is easy and filling and cheap, but I find it boring to boil the water and a pain to drain it afterwards.  So, instead, I spread the cold leftover chip shop chips in the casserole dish, then I spread the finely sliced leeks on top and mixed them through, and I strew some gammon cubes over, and then I poured on a luscious cheese sauce, made the normal way but with a dash of malt vinegar added, and having been witnessed by Littl'Un for the first time ever (yes she loved the magic as the roux turned), then I topped it all off with a bit of extra cheese and then baked it in the oven for as long as we could stand it, and until the top was all golden and crispy.

I'm not going to write a recipe, because I'm not that patronising, and I don't measure my white sauce when I make it, but I will add some pics because it really was delicious and very easy, very satisfying and extremely tasty and comforting! 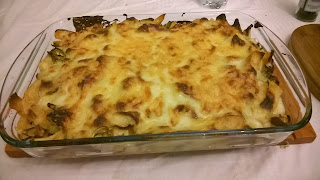 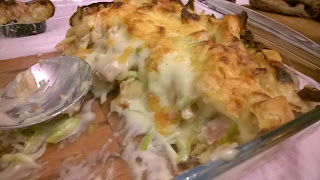 Posted by sweet without sugar at 22:50 No comments: