We had a tub of organic creamcheese which had been shoved against the back of the 'fridge which made it freeze solid and go all granular. Nothing wrong with it, but the texture wasn't right ('rangy-dangy' as Big'Un used to say when something was weird and not as usual) but I didn't want to just bin it when it was perfectly good to eat, so I decided to cook with it...
I scooped it into a bowl with another tub full and beat them together. Then I added 4 rounded tsps of cornflour, 1 egg, about a quarter of a cup of golden caster sugar & a few drops of lemon oil. Beat it all til gloppy & then poured it into a 1.5 ltr dish which I'd prepared with a crushed digestive & melted butter base.
I then dolloped tsps of basics lemon curd on top. The whole thing was then baked in a moderate oven for about half an hour/35 minutes til set, brown and firm to touch.
Eat with care as lemon is still really lava-like.
Maybe a drizzle of organic cream could help..
Posted by Kitchen Mama at 00:20 No comments:

A couple of weeks ago, I picked up a BIG pack of nice quality mince in Sainsbury's and cooked it all up - bulking it further with grated courgettes, green lentils and the usual mirepoire of carrots, celery, onions, as well as 2 tetrapaks of basics chopped tomatoes. A little red wine, some ubiquitous Marigold, a little cocoa, and a lot of simmering later and I had a BIG pot of succulent, savoury, comforting ragu sauce. Immediately portioned half off and stashed it in the freezer.
So with the portion we didn't freeze, well, the kids love spag bol, so we had that for dinner and lunch the next day too, and GodPapa took some to work with rice for a quick lunch. There was a very small portion left, so I made a batch of pizza dough in the bread machine, divided it into 4, rolled them out into vaguely even circles, smooshed a couple of teaspoons onto half the circle, sprinkled a lil grated cheese on top and then folded it closed and pinched up the edges.  Baked as for pizza, and served with salad this was a HIT. SO much so that Litl'Un made a special request that I make this for dinner when Daddy next comes to visit.
So, this week, I took out the freezer portion, and used half in some Discovery Taco Trays, which were a HUGE hit, and used the other half of ragu to make 6 calzone today, as kids' Dad came to visit. It was still a hit, and Big'Un ate as much as the grown-ups.

As a side note, I want to add that for both the Taco Trays and today's calzone, Big'Un made a yoghurt dressing from a recipe she learned at the Real Food Festival last year, and it was YUM.
about 4 dessert spoons of yoghurt,
one teaspoon mint sauce
one teaspoon wine vinegar
salt and pepper
mix.
Posted by Kitchen Mama at 23:46 No comments: 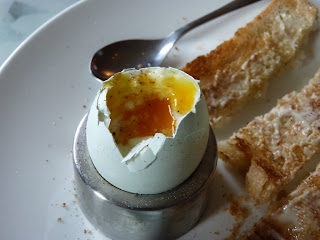 something from nothing quick lunch

This'll prolly take longer to write about than it did to make, and I'm not a slow typist!
I cooked a portion of spaghetti, when done I drained, returned to dry pan with a lil butter, tipped in a small tin of mackerel fillets in oil and a good handful organic rocket from our box delivery. Didn't have any cream or even yoghurt so a squeeze of lemon and a grind of black pepper and YUM!
Posted by Kitchen Mama at 12:33 No comments: