I'd heard much about Dishoom over the past few months, and followed them on Twitter, and drooled over the online menu, and read reviews, and seen people tweet about how lovely it is there, and so when my older kids were both away over the school Easter holidays for a couple of days at one point, I seized on the opportunity and took my good friend GodPapa to lunch there, to thank him for all the help and support he has been providing particularly the last few months since the Littlest was born.  GodPapa and I are both similar in our foodie tastes, and as Dishoom is all about sharing, it seemed the perfect place to go to together.

The decor is charming and fun, evoking the Bombay Cafe feel, with the retro Indian posters and sepia family photos on the walls, lazy ceiling fans and the cabinets of medicines and tonics in the loo cubicles.  The joss stick smell made me smile as we walked in, and the music widened my grin further.  I had spent time in cafes in Bombay and Calcutta and Delhi in my childhood, the effect was there undoubtedly, with a safe, hip, western feel, so I didn't feel it was so authentic I couldn't drink the water, but not so copied that I felt I was in a theme park.

The welcome was warm and friendly, and we didn't at all feel unwelcome with a baby, even though it was lunchtime and all the other customers seemed to be office workers and locals.  Our waiter wasn't exactly smiling and friendly, but he was solicitous and not unfriendly. He explained how the menu works and recommended 2 to 3 small dishes per person, but our budget was unlikely to stretch to that, and to be honest, the 1-2 dishes were ordered per person were WAY too much!  To be fair, he did suggest that we might not need the plain rice, but we pointed out that the biryani rice might be too spicy to give Littlest with the daal. 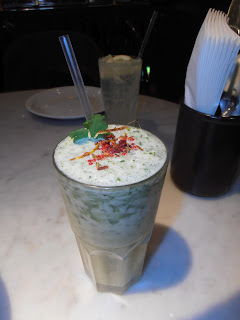 I ordered a fantastic Bombay Virgin Colada to drink - pineapple, coconut milk with a twist of various herbs and spices and decorated with paan masala which gave a heady scent to the drink too.  GodPapa had a refreshing nimbu pani, which he loved as it wasn't sweet, and was really palate cleansing.

Our pau bhaji arrived first, and tasted just as it does when my sister-in-law makes it. The buttery crunchy toasted bun - the pau - with the spicy unctuous veg mash to spread on top, with a crunch of raw sweet onion to bring out the zing. The portion was perfect. 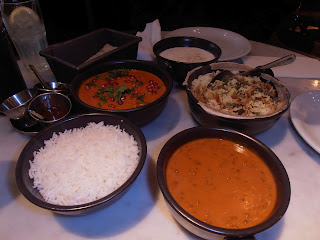 The other dishes all arrived together, house black daal, lamb biryani, rumali roti (literally handkerchief bread,) perfect plain rice and the special of the day - phaldari kofta, as well as a bowl of raita as suggested by the waiter.  A trio of chutneys were brought and described, and the waiter even offered an extra bowl instead of a plate for Littlest, without my having to ask. I just wish the waiter had smiled a bit! 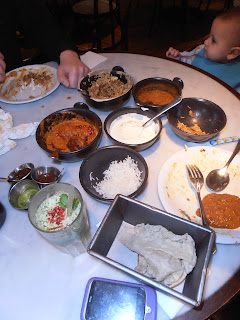 The biryani had obviously been baked with the traditional dough lid, you can see the remains on the edge of the  bowl above, it was fragrant and deeply satisfying, the meat was so tender I was able to pop shreds into Littlest's mouth, and the rice was spiced, but not spicy.  The black daal was stunning.  Creamy, buttery, rich, comforting - my mouth is watering as I think about it. It was the real star of the show, and even GodPapa admitted that it was better than his (I'd have to say it was even better than the Gurdwara daal, and that's saying something too!)  The roti lived up to its name, it was thin as a handkerchief, and soft and lovely.  The only let-down was the special, which was quite expensive, and though tasty with a well flavoured gravy and bursts of sharp pomegranate, it got boring quickly and just didn't feel worth the £3 more it cost than the next most expensive thing we ordered.  I must admit I'd never heard of phaldari kofta, and I was actually alarmed upon googling to read that it is meant to contain raw banana as this wasn't mentioned anywhere, and as I know of people with severe banana allergy, I felt concerned. I can't imagine I would ever check for bananas in a curry!  Having looked at a mention online of Dishoom's phaldari, it seems they may not use banana or plantain, but as this seems to be the defining factor of a phaldari, I'm not sure what this dish was actually going for. I'm surprised, because the other dishes were unfailingly authentic tasting, but as a hit-rate, this was still definitely a fantastic meal.

I would certainly go again with more of the family, there were certainly things the littler people would enjoy, and Big'Un would love all the food, spicy included.  I'd certainly try the puddings next time, and I'd be more likely to stick to small plates for sharing, and try more things, rather than getting bigger dishes to share.

I'd just like to add that the Twitter presence of Dishoom seems lovely too, to the point of even asking me to elucidate on a veiled reference to my only staff-gripe! Lovely people, lovely food, prices that were totally in line with a Covent Garden restaurant, not extreme, and a fabulously fun atmosphere.﻿
Posted by sweet without sugar at 19:51