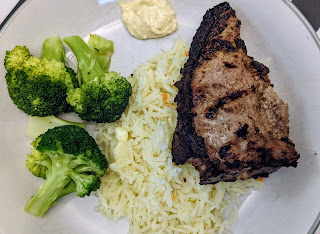 As we enter the barbecue season, some supermarkets put together meat packs which can be great value, and Papa managed to score an amazing value lamb pack which happened to include some beautiful lamb chops.  I decided to use my amazing sister (in-law)'s way of tandoorifying food, and so I marinaded the chops in the early afternoon and then cooked them in just a few minutes on the Ninja Max grill.  They were astounding!  I paired them with some steamed broccoli and some tasty buttery pilau style rice using the secret tip imparted by Big'Un's amazing boyfriend, Nate.

As I'm brown, I often get asked how to tandoori things, and I've never really done much this way, so never been able to suggest much other than "buy some tandoori powder?" so I'm really pleased to be able to share this.  I recall I used to avoid tandoori because of the bad colourings used, but it's now pretty easy to find packets of tandoori powder.

*about half a cup of onion/garlic/ginger paste (I used 2 blocks of (defrosted) frozen ginger garlic paste, and one small bitzed up onion)

*a drizzle of oil

a small piece of cinnamon

First, marinate the lamb.  I did this around 4pm and I grilled them at about 6pm.  You can do it for longer or for as little as 30 mins.  Mix all the starred ingredients (these are Sonia's amazing flavour combinations) together and then add the lamb and mix and coat well.  Cover and leave.

When you are 30 mins away from your meal time, heat the ghee (or inferior alternative) in a large saucepan and add the spices (bayleaf, cardamom and cinnamon.) After a few minutes, they will start to release a lovely fragrance.  Now add the rice, and the Polish seasoning, (this is the secret Nate gave me) and stir to coat well.

A minute later you can add the water, you will need 2 and a half cups of water for this amount (2 cups) of good quality basmati rice. Cover and bring to the boil.  As soon as it boils, turn the flame down as far as possible and let it simmer for 15 minutes.  You know the drill, as soon as the timer goes off, switch off the hob, and then set another timer for 5 minutes and DO NOT TOUCH THE PAN.  When the timer goes off again, then you can lift the lid and gently fluff the rice with a fork.

Back to the lamb.  While the rice is simmering, heat up your grill.  You can use a griddle pan, or a barbecue, or the grill setting of a gas or electric oven, but I used the Ninja Grill Max (which is known as the XL in American and some other countries.)

I heated the grill with the grill plate in to high, and then added the chops well spaced.  I had to cook them in 2 batches , but they didn't take long, so it really wasn't a problem.  I used tongs to lift them out of the marinade and I made sure I didn't drip the marinade all over the  place.  I closed the grill and left it alone for about 4 - 5 minutes to sear and stripe.  Then I turned the chops and closed the lid again.  After another 4-7 minutes depending on thickness of chop and size, they were all charred and striped and really delicious.

I served the chops with some steamed broccoli, and the rice, and some amazing jalapeno hummus I found in Costco!  If you like some yoghurt and pickles or chutneys could also be nice on the side, or a crisp salad if that's more your thing.

Posted by sweet without sugar at 21:32