When my mother fell seriously ill last year, she was in hospital for some months.  She really hated the food, and I tried to cook for her and take it to her in the evenings so she could eat home-cooked hot food at supper time.  There were no heating up facilities, so I used to either cook it freshly and put it in a food thermos and drive there at dinner time or I'd cook it earlier/ the day before, and heat it up and put it in a food thermos and drive to the hospital at dinner time.  We would also take a metal bowl and a plastic spoon for her to eat from and with, as the hospital only had plates in the evenings and the metal spoons they had were too heavy for her to use comfortably.
Doing this was an honour and a privilege and I will always be grateful that I could do her this one small service as often as I could.  I would honestly give anything to cook one more time for her or for my dad.
One day she asked me to make this specific daal, mung daal.  It is often given to patients and the elderly, as it is supposed to be easy to digest.  As it was never one I liked as a child, I had never asked her how to make it, so I sat with her and took notes as she described how she cooks this.  I'm glad I did that then because soon after that, she lost a lot of the capacity to have told me any more recipes, although she did not die for some months after.
Since that time, I've learned to love this dish and I often cook it now for my vegan and vegetarian friends and colleagues, as well as for the family.  The quantities below will serve 1-2 people and rely on using the measurement of the ubiquitous Asian "rice cup" - a plastic cup that comes with most rice cookers - I have since found that the volume of those rice cooker cups is the same as the volume of 2 rice-portion scoops from the Love Food Hate Waste campaigns.
Mung/Moong Daal
half a rice cup of yellow mung lentils
quarter teaspoon turmeric powder
half teaspoon salt
half an onion, roughly chopped
2 green chillies, one left whole, one broken in half
2 cloves of garlic, sliced.
First, soak the lentils for half an hour.
Drain well and put into the pressure cooker.
Add slightly more than double the volume of water. (About 1 and a quarter rice cups of water.)
Add the turmeric, salt, onion and green chillies.
Give pressure whichever way you normally do for 8 minutes.
If possible, allow pressure to release naturally - otherwise, a quick release will be ok, but messy.
Mix well to smash the lentils. I've seen some Indians use a really cool piece of very simple equipment to do this - it looks like a star on a stick, and the star is put in the lentils and the stick is spun between the palms to whisk up the lentils! 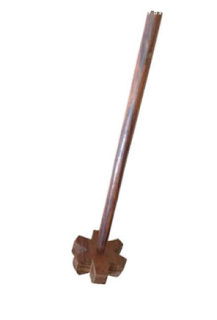 Fry the sliced garlic in ghee or vegetable oil until it just starts to brown.  Add to the daal.  Check the salt and the consistency.  If you need to add more water, be sure to continue to heat the daal or the water won't mix in properly.  If it pleases you, garnish with chopped fresh coriander.  This does not please anyone in my family.
Enjoy with rice or chappati.  Think of me and my darling mother.
Posted by sweet without sugar at 23:33