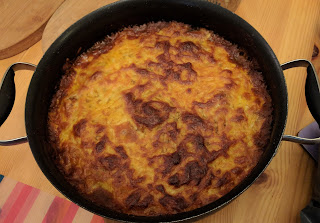 On a chilly Friday, I wanted something stodgy and comforting to feed us, and the special offer, impulse-buy pack of gnocchi seemed the right thing.  I had stopped buying them for a while as the kids just didn't seem to enjoy them, but I don't like to give up, and I like a bit of a change sometimes from the pasta/rice/potatoes trinity of carb options. We do occasionally have a bread supper, but that's also rare.

So I began by frying the gnocchi slowly in some olive oil to get them slightly crunchy on the outside, which makes them a nicer texture after baking, I feel.  To make this a true one pot, I used a pan which can go in the oven also, but if you don't have one, you can always pour the contents into a baking dish before the final step.

Once they were starting to be golden all over (and this DOES take time) I added some frozen chopped garlic and allowed it to soften and lose its harsh bite.  I then added a box of Heinz Fritto which is basically a flavoured passata, and also swished out the box with some hot water and added that too.  I then put in a handful of balls of frozen chopped spinach and stirred them in and then brought the whole pan to a gentle bubble.

Finally, I covered the top with a layer of grated mozzarella and put the pan in a preheated medium oven for about 20 minutes.

I was rewarded with a deliciously crunchy top cheesy layer, with good oozy strings of cheese when served, and a very filling and nutritious meal all round.  The kids did enjoy it, although it wasn't one they immediately said they'd request again, but clean plates and small victories, definitely!
Posted by sweet without sugar at 22:23