more on no-drain pasta - in which leftover chicken is utilised

As I've mentioned before, I have an issue with draining pasta.  This is partly due to the fact that I have problems with my wrists and hands, and lifting and tipping a full pan of water is painful and uncomfortable for me.  But partly I just don't like doing it.  It feels slow and wasteful and somehow just annoys me.

So when I stumbled across this method for cooking pasta in 4 minutes in the Instant Pot (IP) with minimal water - like an absorption method of cooking pasta - I HAD to try it!  And it is fantastic! Admittedly I probably spend as much time using a slotted spoon to scoop out the pasta as I used to do waiting for water to boil etc, but somehow this just makes me less stressed and irritated than the standard method, and that can only be a good thing! In the future I may use this method to cook the pasta in the IP when I can then just stir something directly into the pot and then serve straight out - cream cheese and smoked salmon/ham springs to mind...

Anyway, I started by letting Tiny choose a pack of bow tie pasta from the corner shop, and we used the whole 500g pack in one go.  This gave us PLENTY of pasta - after cooking, I filled a locknlock box with cooked pasta which was a nice quick and easy lunch for Tiny on the weekend - and the rest served 4 of us generously with another couple of lunches.

As the recipe in the link says, we added about 4 cups of water to the IP, so the pasta was just about covered, maybe a few corners poking up here and there.

I then set the IP to cook for 4 minutes on manual.  I had added boiling water so this went even more quickly than normal.

Once the pot has cooked the pasta for the 4 minutes and beeps that it is finished, switch it off immediately and perform a quick release.

Remove the pasta with a slotted spoon and if required box some up for another day.

I then fried some chopped onions and garlic in a little oil straight in the pan I'd just taken the pasta out of, and then I added a chopped up chicken breast left over from a very frugal Lidl roast chicken supper we'd had recently.  Then I added a bag of prepared cauliflower and broccoli florets which I'd bought in Lidl, along with the obvious spoon of Marigold, and a good squirt of mild mustard.  I finally chucked the cooked pasta back in, and stirred through some soured cream which we'd opened for the not-so-chilli recently.

The result was completely delicious and moreish.  The chicken was not dry, the veg was still slightly crunchy, the creamy but tangy sauce was very comforting and the whole meal was filling and satisfying!  The kids all devoured it hungrily, and the 2 little ones both asked for seconds!  Big'Un and I ate it drizzled with Frank's Buffalo Wings hot sauce, and the little ones even had a taste that way too, and really enjoyed the added flavour.  And when I went to put the leftovers into a tupperware, and I picked a box that was slightly too small, Godpapa was more than happy to just eat up what wouldn't fit, straight from the pan! 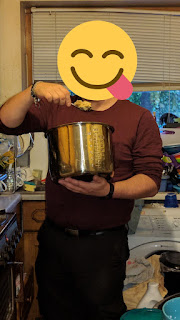 Posted by sweet without sugar at 22:10