Not at all a quick lunch, but something I really enjoy on a cold weekend lunch time, crispy flaky buttery flatbread with tangy sweet chutneys, sour hot pickles and cool creamy yoghurt.  Bengalis traditionally enjoy a bitter green vegetable dish to accompany a meal like this to cleanse the liver.

This was a REALLY frugal meal, and if one has time and inclination, can really boost your budget a lot, as it's cheaper even than a few sandwiches for lunch for the family.

The paratha dough is easy, similar to chapati, but with a tablespoon of oil added - 2 cups of atta, half a teaspoon of salt, a teaspoon of garam masala, aforementioned oil, bound together with a quarter cup (ish) of water.  Firmly kneaded until smooth, and then left to rest for half an hour.

I then rolled small balls 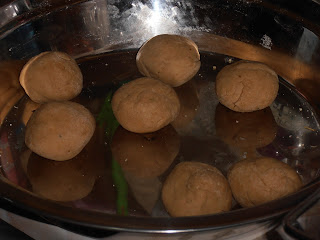 and rolled them out 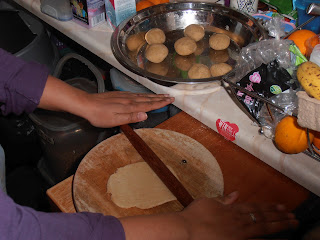 then I spread a thin layer of melted ghee onto the rolled out circle, folded it up like an envelope into a square, and then rolled that out again. Then I slapped it onto the preheated tawa, and circled around it with a dab more ghee. 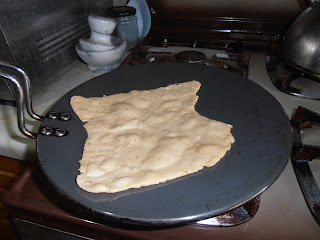 Once it bubbles up, there will be nice brown spots underneath, so it's time to turn it over:﻿ 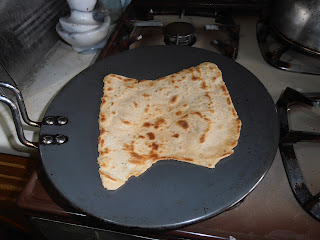 Repeat for all the balls of dough, keep them all hot and serve together, or serve one at a time.

As for the bitter greens, in this instance, I had some kale I had attempted to dry in the oven as crisp kale snacks, with a touch of oil and soya sauce, but it wasn't as tasty as the Inspiral raw kale chips, and a lovely fairy Godmother bought me 2 big tubs of those, so I thought it worth a try to curry it in some way rather than just throw it out.

I fried some chopped shallots and garlic puree with some oil or ghee in a karahi and then added half a teaspoon of cumin seeds.  I dumped the kale in, and once it had cooked into the flavoured oil, I added a tablespoon or 2 of natural yoghurt, and finished it all off with a drizzle of mustard oil for the authentic Bengali scent.  It was heavenly and I will be trying this dish with fresh kale sometime, for sure! 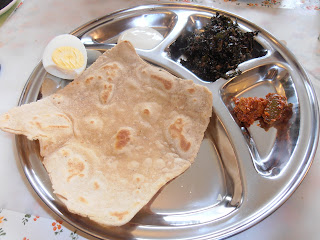 A kid thali!  She had mango chutney with her yoghurt later, and a boiled egg for protein. Even the Baby loved smushing his paratha into some yoghurt on his tray.  He even ate some! 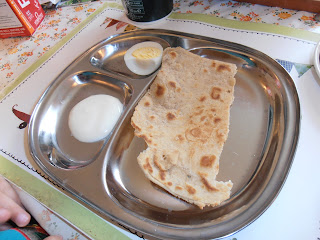 Posted by sweet without sugar at 22:41