some catching up and a sudden change in diet! 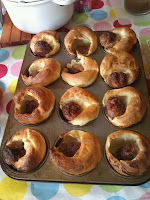